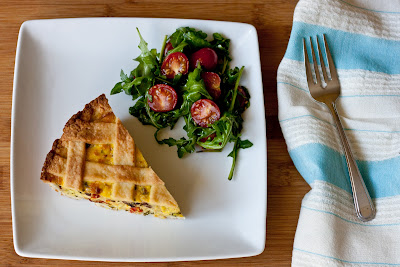 During the month of April, we will bake two recipes for Tuesdays With Dorie: Pizza Rustica for the first half of the month and Lemon Loaf Cake for the second.. Below is my experience with Pizza Rustica..


Contrary to its name, Pizza Rustica is not actually a pizza.. It is a pie with a slightly sweet crust and a ricotta based filling.. Original recipe from Baking with Julia makes the filling with 3 types of cheese (ricotta, pecorino romano, and mozarella), eggs, prosciutto, chopped parsley and freshly ground black pepper.. I wanted to make a vegetarian version of it and replaced prosciutto with kalamata olives and sun-dried tomatoes, 1/4 cup of each.. Thankfully, the substitutions worked out well.. One thing to say about filling making process is I put ricotta on a strainer with paper towel on, for 1-2 hours, and kept it in the fridge to drain the excess liquid in it.. I believe otherwise the filling can get watery..

To be honest, I was not very excited to try this recipe, due to my scare of pie crust preparation and rolling.. One of the great things about baking with a group is that it forces me to try new recipes that I wouldn't have the courage by myself.. Pizza Rustica is one of those for me..

My dough making started a bit problematic.. Instructions in the book explains how to make the dough in a food processor and I have a very small one.. Since I did not want to risk failing to do it by hand, I used my tiny processor anyways.. When I put all the dough ingredients listed, it got full to the top.. The book says pulse the mixture until the dough makes a ball around the blade.. And, this did not happen in my case due to over-crowded food processor..

So, I had to put the crumbly mass on to a floured surface and kneaded it (or try to knead it) until it resembled a smooth pie dough.. I chilled the wrapped dough in the fridge for couple of hours before rolling.. It was very easy to roll - unlike what i expected :) - and I was very proud of myself when I pushed my pie crust into the pan.. It was the first time I made a full pie :)

Then came putting the filling over the crust, and rolling the remaining dough to make crisscross decoration strips.. This part went well other than my stripes not being identical and failure to make basket design :)


And the rest is baking it until the top is golden brown, which became golden very quickly and the edges got a bit darker, but did not burn.. It was difficult for my husband and I to wait until the next morning to taste it because I wanted to take pictures of it using daylight before eating into it.. We ate it both on Saturday and Sunday for breakfast.. The verdict is we "liked" it..

Conclusion: The recipe was easier than it seems, and the end product is good-looking and tasty.. It makes a great brunch or lunch dish with a side salad.. The crust is beautifully flaky and slightly sweet.. It can be used with sweet fillings or variation of savory fillings.. I enjoyed the combination of the sweet crust and saltier filling, but it was too much ricotta blandness for my taste.. I am not sure if I will go back to this recipe anytime soon when there are so many new ones to try, it was tasty but not out of this world tasty for me..

For the recipe please visit blogs of this week's hosts, Emily and Raelynn : Capital Region Dining Blog and The Place They Call Home, or buy the book: Baking with Julia.. 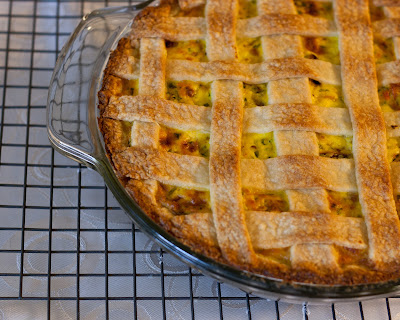 Looking forward to meeting you in two weeks with the next recipe for TWD: Lemon Loaf Cake..
Posted by ferda at 9:11 AM