Here is another recipe from Baking with Julia.. Pecan Sticky Buns..

I started baking this buns on Friday around noon and pulled the tray out of the oven exactly at 3.30 am Saturday.. It takes a long time to prepare them with all the waiting times for chilling and rising of the dough.. I halved the whole recipe, since we don't need 14 buttery sticky pecan buns for two of us.. And also using +5 sticks of butter for the whole recipe was unacceptable to me..

I was going to tell the process step by step - and started to do so - but it was taking forever with all the 'do this and rest the dough for xx minutes/hours' again and again.. So, I decided to only highlight the changes and mistakes I made compared to the original recipe..

- I halved the brioche dough recipe and made no alterations in the ingredients.. The only thing that did not go as planned was that the flour coating on my sponge did not crack as obviously as the one in the book. It worried me for the rising of the dough for the next steps, but everything went well with rising so my yeast was alive.. This brioche dough part alone takes like 10 hours preparation time, all the waiting times included..

- I do not have a stand mixer.. I used hand mixer for making the dough.. Thankfully my hand mixer survived this heavy duty..

- You laminate already buttery brioche dough by dotting the rolled out dough with butter.. I decreased the butter amount by 1/4 stick here..


- I made couple of mistakes during rolling the dough with the fillings.. Firstly, I did not brush the top of the rolled dough with the egg, which lead to it opening up while baking.. Secondly, I did roll it from the long side (long side of rectangle being in front of me), which gave me skinnier and taller rolls when cut into pieces..

- I decreased the amount of butter smeared on the baking pan by half (from 1 stick to 1/2 stick).. I can not even imagine how buttery it would be if I used the full measure..

- The last stage before baking is rising of the rolls in the pan, and mine did not rise enough to touch each other (the book says it should).. I assume it was because I rolled them from the wrong side of the rectangle..

- Finally, I baked it 5 minutes less than the recommended time, because the top was getting dark.. This resulted in no caramelization of sugar and butter on the bottom of the pan, the brown sugar stayed grainy rather than becoming a glaze..

Overall, these pecan sticky buns are tasty.. But not delicious, heavenly or out of this wold type of tasty that I would go into this much effort for them again, or consume this much butter for them.. I expected a softer and tastier dough, and more caramelized topping from them..

For the recipe please visit blogs of this week's hosts, Lynn and Nicole : Eat Drink Man Woman Dogs Cat and Cookies on Friday, or buy the book: Baking with Julia.. 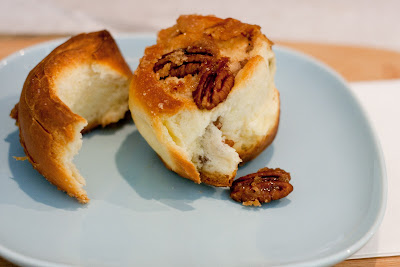 The recipes that are going to be baked in June are not decided yet.. I hope they will be much lighter than May's recipes, and use a lot of summer fruits..