For some reason I did not realize this recipe was due today, but thought it was for next Tuesday.. When I realized last night that it had to be posted today, I was not sure that I would make it on time, because I had other plans for today and also I was trying to eat healthier until the weekend in order to compensate all the goodies I savored last weekend :) Then, my sense of responsibility kicked in, and I couldn't let myself be late for this one.. The result, my diet did not go well with 2 sticks of butter in this treat.. It was worth it though.. 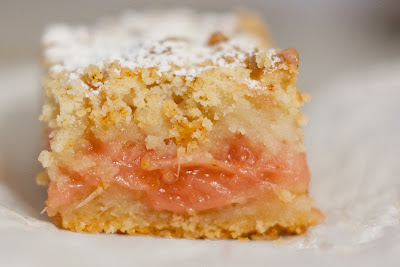 I was really excited to try this recipe from the moment I went through the recipes when I first got my Baking with Julia book.. Simply because I love rhubarb and I love a dough that does not need special treatment and rolling.. And this recipe is perfect: you make the dough with a mixer, divide into two,  freeze both, then grate the frozen dough before you bake.. Just perfect :)

Baking with Julia version of Hungarian Shortbread has home-made rhubarb jam sandwiched in between two layers of shortbread.. I was a bit scared of the amount of butter that was used in the recipe - whole recipe calls for 4 sticks of butter.. I halved the recipe to decrease the butter consumption (I know it is the same amount of butter per slice, but it just did not feel right to consume 4 sticks of butter for one recipe) and baked it in 8x8 inch square pan instead of the recommended 12x9 pan.. It smells delicious while baking, and tastes divine.. Melting in your mouth, buttery, soft and crumbly shortbread with sour, not too sweet rhubarb jam in between.. The jam can be substituted with any other type, just make sure that it is a tangy one to compensate sweetness of the shortbread..

The recipe is very straight forward and easy to put together.. As mentioned, it has the easiest dough process with such a great result.. Preparing the rhubarb jam takes like 15 minutes.. Mine was a bit watery after 10 minutes simmering, which was recommended time by the book.. So, I boiled it a bit more to get rid of the remaining water.. Still, I was not impressed with the taste of it, it tasted kind of bland to me by itself (within the shortbread it worked perfectly).. I did not follow the book's instructions about dusting the shortbread with confectioner's sugar right after taking it out of the oven, but waited the dish to cool down before dusting.. I did not want my confectioner's sugar to melt and disappear over the hot shortbread..

Conclusion: I loved how this recipe tasted.. It is definitely a keeper.. And is open to variation in terms of filling.. Couple of hours after baking, photographing and tasting my product, I was thinking why my shortbread was thicker than the pictures from other Tuesdays With Dorie bakers' blogs and my jam layer looked thicker, then I realized that although I halved the dough recipe I prepared rhubarb jam with the full measure, and used it all.. Well, it tastes good, that is what matters, right :) 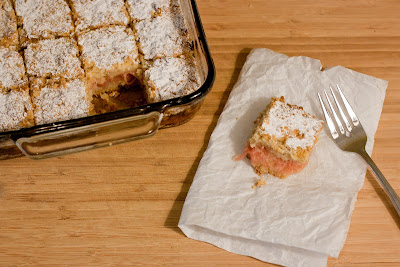 For the recipe please visit blogs of this week's hosts, Lynette and Cher : 1smallkitchen and The Not So Exciting Adventures of a Dabbler, or buy the book: Baking with Julia..

See you in two weeks with Pecan Sticky Buns.. Another recipe with tons of butter in it.. Looking forward to trying though.. It uses brioche dough, and baking brioche is in my to do list for a while now..
Posted by ferda at 8:08 PM