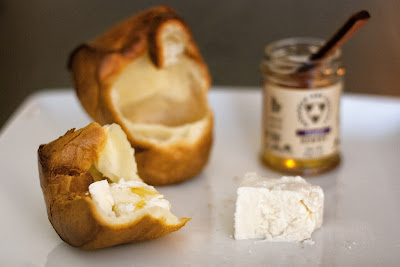 Today's recipe is Popovers.. According to Wikipedia "The popover is an American version of Yorkshire pudding and similar batter puddings made in England since the 17th century,[2] though it has evolved considerably.[3]" It is selected for this month to honor Marion Cunningham, who contributed this recipe to Baking With Julia and has died in July 2012.. I had never eaten or seen these crispy outside hollow inside eggy bread before trying this recipe.. That is why, I don't know whether mine ended up being a good one or not..

I like that the recipe is as easy as it gets with the ingredients one always has at home.. You mix all-purpose flour, melted butter, salt, milk and eggs in a blender (I used food processor) and pour the batter into muffin or custard cups.. Then, bake at high temperature until they are puffed, browned and crisp at the exterior, and decrease the temperature and bake a bit more to dry the interior.. And they are ready to eat as soon as they come out of the oven.. My only problem with the recipe was the baking times mentioned in the book.. Although I took them out of the oven before the mentioned baking time was finished, mine were still over baked.. If I bake these again I will decrease the baking times for both temperatures..

They do not have any particular flavour.. I enjoyed my popovers with feta and honey right after I took the above picture.. The exterior was very crispy and inside was empty with some stringy dough right under the crust.. I don't know if it was supposed to be like that or is it because mine were over baked.. The book says the inside should be custardy, mine definitely was not..

If you would like to try this very easy recipe, please visit the blogs' of this week's hosts: Vintage Kitchen Notes and Bake With Amy.. Or buy the book Baking With Julia..

Thanks for stopping by..
Posted by ferda at 9:00 PM